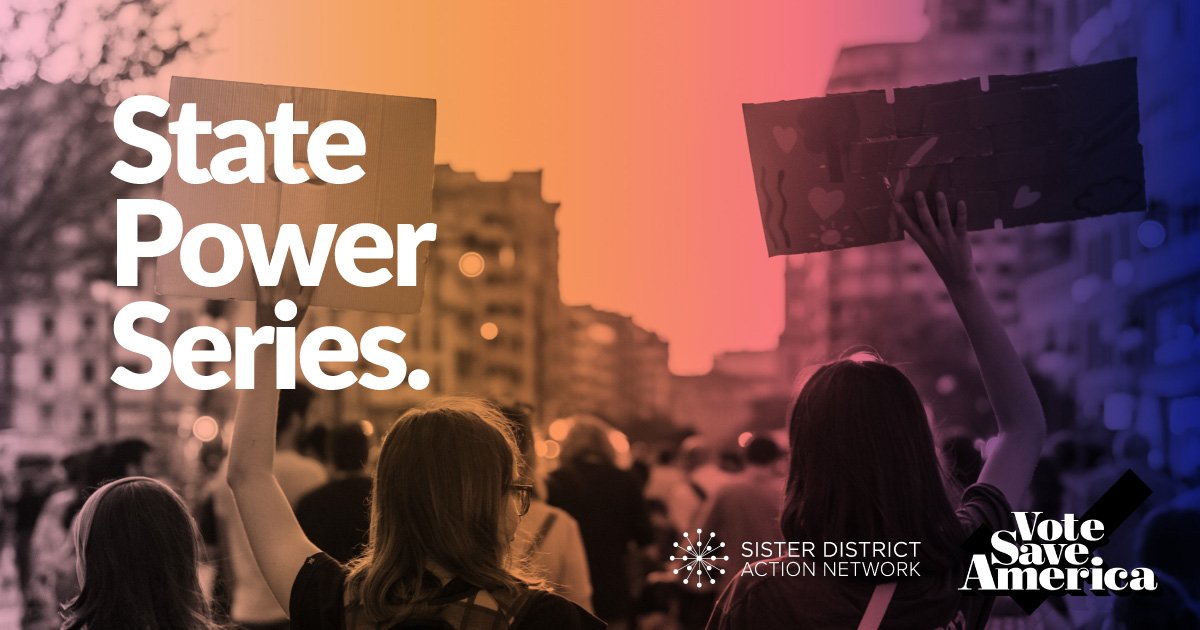 The State Power Series is a virtual event series co-hosted by Sister District and Vote Save America to start a conversation around the growing importance of states, provide context about the historical circumstances that have placed progressives at structural and ideological disadvantages in state power-building, and emphasize the urgent need for progressives to reimagine states as radical bastions of progressive power and commit to permanent, sustained state power-building efforts.
Each event will feature a panel of hosts from Crooked Media, political and legal experts, historians, elected officials and activists, moderated by Sister Districts co-founder, **Gaby Goldstein**, and Crooked Media’s senior political director, **Shaniqua McClendon**.

**After Roe: Reproductive and Civil Rights Move to States**

This panel is planned for the week we expect the _Dobbs_ decision to be published. After _Dobbs_, abortion access will likely fully fall within the purview of states. Abortion access has never been universally guaranteed, and this development, as with prior restrictions, will disproportionately impact low income people, Black, Latino and Indigenous people, young and LGBTQ+ folks and people in rural areas. After decades of failed policies rooted in systemic racism and oppression, these folks will disproportionately lack the resources necessary to cross the expanding abortion desert to seek care. On the other hand, states including CO, CA, CT, and VA have expanded and enshrined the right to abortion services into state law. This panel will explore the conservative jurisprudential goal of narrowing federal protections and reverting civil and human rights issues back to states, and consider whether the end of Roe v. Wade is an example of how we may be experiencing the death of the ‘rights revolution.’ The panel will explore these trends and discuss what can be done to bring the civil and reproductive rights (and justice) revolution to our states.

**The Insurrection will be Decentralized – Election Subversion: The Role of State Legislatures in the Fight for our Democracy**

This panel will explore how state legislatures play an outsized role in the future of our democracy. In key states, Republicans are building toward a future where they can engineer election outcomes, by modifying the laws and rules governing election administration and limiting the ability of state courts to curb partisan redistricting and subversion. On top of that, an arch-conservative Supreme Court appears likely to thwart a constitutional challenge to this state power grab. We must pour resources and attention into state chambers. What we do now will determine the fate of our democracy.

This panel will examine the historical differences in state power-building between the right and the left. Panelists will speak to the gap between the right and the lefts investment in states and explain the ideological beliefs that have historically prevented the left from substantially investing in state-level power-building infrastructure. The panel will explore how and why we got here – and importantly – what we can do now.

This panel will continue the conversation in Part 1 and will explore how to reclaim the positive power of states, embrace the idea of state power itself, and move toward a vision of progressive federalism.

By signing up for any of these event, you agree to receive emails from Sister District and Vote Save America. You may unsubscribe at any time.