EBAA Fired Up! A Post-Screen Conversation of Slay the Dragon

Fired Up! A Post-Screen Conversation of Slay the Dragon

Fire it up for the fall campaigns by joining East Bay Activist Alliance, fellow activists and friends for a lively discussion inspired by Slay The Dragon, the powerful new documentary about the successful grassroots campaign to end partisan gerrymandering in Michigan and beyond. We’ll be joined by Jamie Lyons-Eddy from Voters Not Politicians (VNP), the organization which led the 2018 ballot initiative Redistricting Reform Amendment, as well as Julia Pulver R.N., running to flip suburban Detroit’s District 39 from red to blue. All of our Michigan candidates  support VNP’s VoteSafe campaign to protect our elections during the pandemic. Note: This is not a film screening. Slay the Dragon can be viewed for $4.99 through several streaming services. Though recommended, seeing the film is not a prerequisite for our conversation about the strengths of grassroots activism toward a representative democracy in the wake of a brazen, systematic power grab. 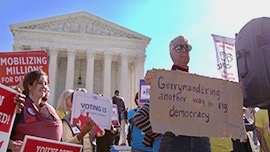